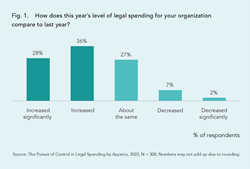 Controlling does not mean cutting legal expenses, which can expose a business to intolerable levels of risk. Control means getting more value for the money spent.

Sixty-four percent of venture capital and private equity firms are spending more on legal services this year – and more (66%) expect spending levels to rise again next year. That’s according to the results of a new survey of 300 in-house lawyers working for these investment firms in the US and UK. The investigation was commissioned by Apperio, conducted by research firm Coleman Parkes and has just been published in a report titled The Pursuit of Control in Legal Spending.

“Inflation may well be a factor as the cost of everything goes up,” says Apperio founder and CEO Nicholas d’Adhemar, who is both a former lawyer and private equity investment manager. “However, there is something more fundamental at play here: private equity and venture capital firms are facing increased compliance and regulatory issues, which inevitably leads to an increase in demand for advice. legal experts.”

Sources of pressure on cost control

One source of pressure comes from sponsors (LPs), said in-house attorneys who responded to the survey. More than eight in 10 respondents (84%) said LPs look into legal fees – and the data shows it’s not just a spot check either. About half (48%) say LPs review legal fees “always” (21%) or “often” (27%).

Another source of pressure is brewed internally. Nearly three-quarters of respondents (71%) say their organization is at least moderately concerned about overall legal costs. About half say their investment firm has “significant” or “very significant” concerns about important legal elements, including individual transactions such as mergers and acquisitions (45%), fundraising (46%) and “internal expenses” (45%) such as legal fees for operating a general partnership.

In-house lawyers working for investment firms face myriad challenges when trying to balance the need for good legal advice with the pressures of cost control. Asked specifically about the main challenges, respondents identified the following:

However, the investigation revealed other complicating factors – which are related. For example, 78% of corporate lawyers working for investment firms say they are surprised by the amount of law firm bills at least some of the time. Among them, about 4 in 10 say that these bills are “always” (16%) or “often” (23%) higher than expected.

“Fixed costs” are often advertised as a remedy to bring predictability to legal pricing. Yet the survey found that fixed costs are not always so fixed. Almost three-quarters (74%) of respondents say that fixed costs exceed the agreed price at least some of the time. This includes 40% who say it happens “always” (17%) or “often” (23%).

Some of the problems lie in the organizational structure of investment firms: deal teams want to move quickly to competitive deals and are empowered to engage in business directly with law firms. This often happens outside the jurisdiction of the in-house legal team. The survey found that 81% of respondents indicated that some cases are initiated without their knowledge.

“This puts corporate lawyers working for investment firms in a difficult position to try to manage expenses over which they have little visibility, let alone control,” d’Adhemar added.

So how does the legal department first learn of these issues?

“The department is informed by a third-party agency,” said one respondent, a legal partner for a private equity firm in open comments. “Through meetings and discussions with senior management,” according to another, who is an associate general counsel working in PE. “We get an email from investors,” noted a third, who is the legal director of a private equity firm.

“Controlling does not mean cutting legal expenses, which can expose a business to intolerable levels of risk,” d’Adhemar said. “Control means getting more value for the money spent. Achieving this requires being proactive: motivating the organization to centralize its legal spend processes, empowering those processes with modern legal technologies, and inviting preferred law firms to be part of these advancements from the start.

On average, these organizations manage $9 billion in assets, spend $12 million a year on outside counsel, and employ five in-house lawyers.

The survey was conducted in August and September 2022 by research firm Coleman Parkes. A copy of the full report can be downloaded here.

Rather than accumulating legal bills, Apperio works by aggregating data directly from the sources of truth – law firms’ time-logging systems. As a result, a greater level of granularity and analysis is possible – weeks before an invoice is received.

Internal teams can therefore work proactively with this data and gain confidence with an accurate picture of their spend. In turn, this information can also improve the forecasting, budgeting, and efficiency of the legal department.

Apperio is based in London, England. For more information, visit Apperio.com or follow Apperio on LinkedIn or Twitter.